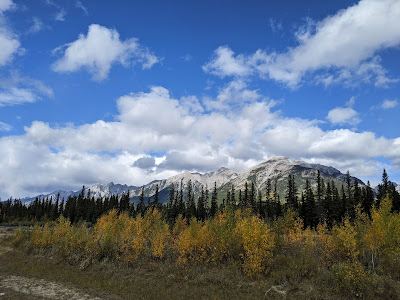 It turns out to have been a good thing that we had already told the kids we'd head out for our Canmore bike ride later in the morning, as we didn't get to bed until after 1am. We didn't sleep as late as we wanted, but we did sleep as late as our bodies and our little Stomp-a-lots let us.

We got to Canmore around lunchtime, with the goal to check out one of the restaurants we hadn't yet tried. Our original plan was to take the patio seating, but, well, it was pretty cold. Mountains tend to be colder than prairies. 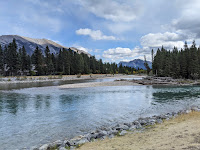 After our fortification, and a stop at the Canmore Visitors Center for maps, we were on our way! We took a route along the river, and headed toward where there was supposed to be an abandoned mine.  We didn't really find the mine, but did find the abandoned coal car to the side of the bike path. What fall colors exist here (shades of yellow and green) were out in full force. We kept stopping to admire the trees, the deep blue skies, and the river.

Next morning I was up early for a hike with a friend. Terry's Sundays are booked with football and Alex hates hiking so I decided to stop moping and get out there. We headed toward an area where there are three major hiking routes within a couple of kilometers of each other - we heard these particular hikes get very crowded so we wanted choices.

Why these hikes, you may ask, if they get so crowded? Larches. Before you Google that, a larch is a deciduous tree that changes color and drops its needles. They are comparatively rare, and even around here - a haven for them apparently - there are only specific pockets of space where one can find them on a hiking path.

Anyway, it was a bit of a comedy of errors relating to the overcorwdedness, long line for bathrooms, difficulty finding parking, and then we hadn't communicated well where we'd meet back up so I was by the bathrooms looking for her, while she found where I had parked the car and waited for me there. All this to say, we actually started hiking more than half an hour later than planned. And then we realized the trail we planned to take (Pocaterra Cirque) was (1) like a traffic jam full of humanity and (2) super slippery from all those feet packing down the snow into ice. Yep, Snow/ice all over the trail. On September 27.

After about 10 minutes we turned around and decided we'd hike a different trail. We made a beeline for the least trafficked of the three (Arethusa Cirque). There were a number of fits and starts there too, many photos taken at the earliest stages of the hike and many references to Alltrails because to be honest, the trail was often not obvious. I was so grateful to have downloaded the route in advance!