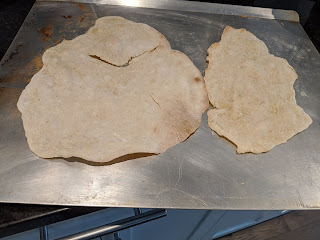 Calgary surprised me with the dearth of Hanukkah candles in December, so I was prepared to expect nothing in any store in the way of matzah come spring. Calgary did not disappoint.  Mails shut down before I could ask my mom to ship me  few boxes from the USA, so I called up the old recipe I used back in Russia to make my own matzah! No rabbi would bless this stuff for a number of reasons, but it did get from water-touches-flour to out-of-the-oven in 18 minutes or less so I am calling it a win and moving on.

The kids had a huge fight that left one child refusing to come down when it was time to Seder ... until Terry worked his magic. Wine and grape juice were drunk, matzah was eaten with horseradish and charoset (although I keep telling Terry he isn't doing it right because he likes the horseradish), and yes we opened the door for Elijah. He didn't touch anything.
Posted by Lynne at 6:00 PM