An Ode to the Ice Cleat 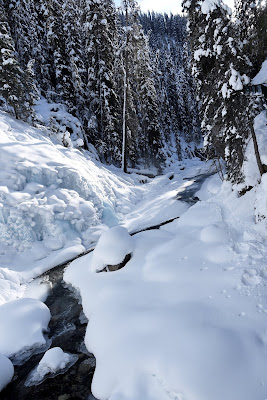 So, I'm not really writing an ode. Although it would rock. We have had experiences with Yak Trax but it was nothing like the joy the ice cleats brought us during the recent hike through Johnston Canyon in Banff (not to be confused with Johnson Lake, also in Banff, but currently closed for the season).  On a number of occasions I would look at my fellow hikers holding on for dear life to a railing or a side of the cliff and wonder why they were being so dramatic. At one point Terry showed me the sheet of ice that covered the path I just tromped down. I had not skidded a millimeter. Oh, ice cleats, why have I only discovered you now?  And, for added joy, they are one of the few items that are actually less expensive to buy in Canada! 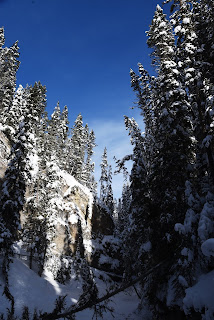 All the tourism literature and bloggers compare it to Narnia/a winter fairyland and it is a pretty fair comparison.  I've now officially made it a personal goal to find and hike all trails that involve frozen waterfalls in the two-hour radius around Calgary.

The trip to the Lower Falls is about 1/2 mile and to the Upper Falls another mile beyond that. If it weren't for the fact that you pass directly by the Lower Falls I'd say give it a skip. The Upper Falls were absolutely breathtaking. We watched an ice climbing crew preparing, and a few individuals summiting the frozen waterfalls.  One family with a toddler and a dog looked to be preparing their own climb and we were very interested to see how they managed, but things were proceeding slowly and we moved on.  Side note: Terry disagrees about which waterfall was nicer.  He enjoyed the lower falls and the cave you could go through to get a better view.  The photo at the end is from the lower falls. Side note: Lynne would describe the "cave" as a hole in the rock that one passes through with one large step.

A decent section of the trail is an open-grate catwalk with railing. Just before the last catwalk to the Upper Falls, there is an option to head off the main trail and head down toward a smaller falls.  This was the ultimate discovery and a highlight of the trip. Not only was the frozen fall spectacular; not only could we walk within a few feet of a deep blue pool being constantly refreshed from an apparently (but obviously not entirely) frozen fall; but also we were able to sneak behind a different frozen fall and catch a glimpse of the world from that unique angle.

We created a new verb during this trip - "snowbanking"- which means throwing yourself into a snowbank and taking a rest.  The hike did have its strenuous moments and Terry and I really felt how out of shape we are, so the kids' requests for snowbank time were honored about half the time.  The photos show each kid "snowbanking." They asked every 5 minutes or so, and for a three mile round trip they probably snowbanked a dozen times or more. Towards the tail end we got a bit nervous about getting out of the park before the sun went down.  So the request to "snowbank" were honored a little less often. 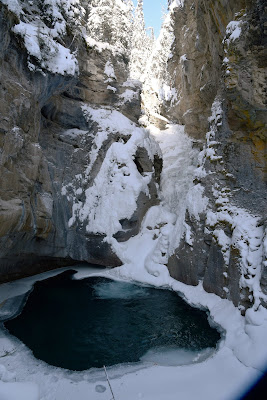