Happy birthday to me

This was definitely a birthday for the books. The mantra of the day for the kids was "Kind, loving, agreeable" - meaning if their words or actions were not one of the three, they had to knock it off. For the first time ever it worked!  So first gold star of the day - very little bickering, no fighting, yelling, crying.

We went downtown and started to break in the museum membership I received from my father as a birthday gift. The museum has an interactive section where adults and children can work on art projects inspired by two temporary exhibits. The kids worked on making prints on pieces of foam and on re-purposing everyday items after having wandered for a few moments (I stretched it as long as I could) through the related exhibits to see what the artists had done. 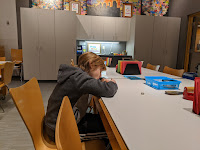 They were so interested in their projects we left the museum 20 minutes later than planned - gold star number two.

We met Terry for lunch at the delicious Korean place near work. The kids only complained about the egg on top but after we pushed it away they ate until full and agreed it was delicious. I call that a win - gold star number three.

Next up - ice skating at Olympic Plaza. The Zamboni came out as we were tying our skates and then we spent an hour on the ice. Randomly, an ice sculpture was unceremoniously unveiled while we were there. Interesting fact: This park is the epicenter of Calgary's "ringing in the new year" activities (hence the ice sculpture) and there were about five times more people on the ice at midnight when we saw it on the TV at home. 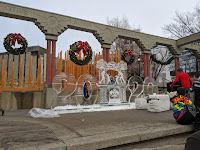 By the time we were ready to head home, it was time to pick up my birthday Made by Marcus cake. We have recently discovered this local ice cream place and have really enjoyed getting a cone there. Sadly, we all had to admit later that Rocky Road is not their best flavor. I mean the DQ ice cream cakes the kids got for their birthdays were better.  Ah well, live and learn.