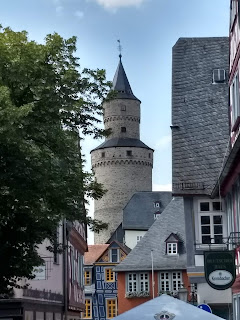 The food at the Burg Eltz cafe didn't appeal to me so I decided to stop somewhere on my way home. I had heard Idstein was a pretty city to visit so had it in mind. Hadn't really thought through that it's an hour away from Burg Eltz and I only left there close to 2pm ... suffice it to say I was hungry and grumpy when I got to town.

Most of the restaurants were closed in mid-afternoon but I found one that was open and not too far from where I parked and I tried a potato-and-bean-pancake (like a latke but with some kind of small white bean among the potato, presumably to protein it up). It was very tasty and the radler I had with it was refreshing so I was ready to hit the town after I ate.

The main sight in Idstein is the "Hexenturm" or Witch's Tower. Unless my German is way worse than I think it is, you can go to the tourist info center and ask for the key to go inside. When I wandered past the building there was a tour guide just closing up, but I plan to visit the town again so it wasn't a big deal not to get inside. 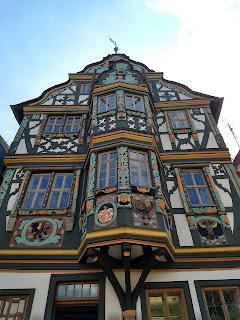 The town is filled well amazingly well preserved, colorfully painted half-timber housed. I may have mentioned this before but I am beyond charmed by half-timbered houses. 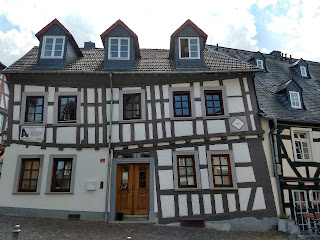 It looks like it's falling down, because of the angle of the timbers. 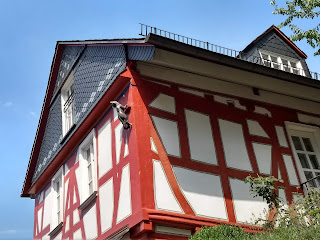 That is not a real cat on the side of the house
Posted by Lynne at 3:11 PM