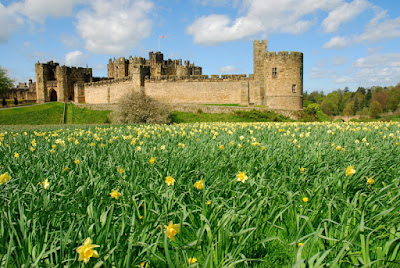 When we went to England, we were desperate to find a book long enough to keep Alex's attention for more than an hour because we didn't have enough space or weight to carry as many of her usual books as it would take to make the trip.  I thought Harry Potter would be the perfect complement to an English vacation.

She stubbornly refused to read it. In retrospect we should have had her watch the movie first.

The scene in the first movie where they have their first flying lesson?  Alnwick Castle, about 1.5 hours' trip from the hotel.  Turns out a Downton Abbey Christmas Special got filmed there too.

The place is impressive, with several smaller museums in various towers, the main State Rooms beautifully decorated, a library I could kill for, and for the kids a whole Knight's Quest area with costumes for dressup, activities to pursue (they made soap) and medieval games to learn to play. In addition, for the older and/or braver ones, a Dragon Quest that was like a tamed-down version of a haunted house but with the addition of riddles and games to solve to get the answer to the Quest.  And, finally, the broomstick flying lesson.  Because there must be a broomstick flying lesson. It went way longer than we expected so halfway through Zoltan got bored and tired and went to sit down.
Posted by Lynne at 12:01 PM