The Russian word Ёлка can mean either a decorated evergreen tree (much like a Christmas tree, but in celebration of New Year) or for a children's event that at some point in time takes place around such tree.

Like last year, we got ourselves a little tree for the house. Unlike last year, we also went to the other kind of  Ёлкa. It was held in a former palace, which is now called unofficially the "Children's Palace" because all the citywide afterschool cultural stuff (dance, instruments, choirs, etc) are held here. It's a pretty sweet deal, nothing like it in the USA, kids get free instruction and it's open to all city kids.

Anyway. We walk in, strip off the millions of layers between the kids and their adorable outfits, everyone changes into their indoor shoes, and we take a few photos in front of the first sparkly flashing tree sitting in the lobby area (after watching a couple of Russians do the same). 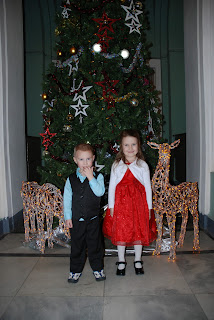 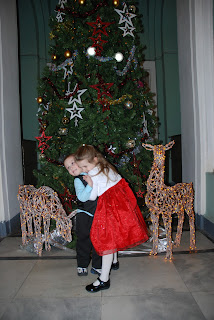 Then upstairs where a couple of ladies are leading the kids in singing and dancing what I can only assume are somewhat traditional New Years songs because Alex knew all the words. The kids, of course, didn't participate but were happy to watch. One of the helpers told another mom that the next room was quieter if she wanted to bring her kid there, so we did too. More trees, this time all white. 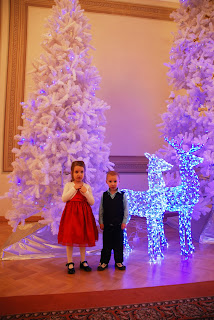 Then the performance.  The "seats" at the front were a sea of golden bean bag chairs. 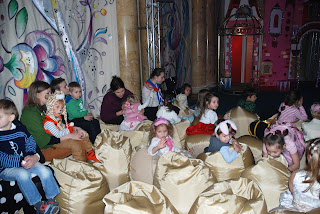 I was annoyed the one lady refused to let Zoltan sit with Alex, she assured me he would definitely cry unless he was with his parents. We ended up in the first row of proper chairs, and there were some bean bags there too, so it wasn't too bad. We watched ... well I'm not exactly sure what it was. It started with Snegurichka (a.k.a. Snow Maiden. She's Father Frost's granddaughter and helps him with his gift-delivery to good children duties) supposed to meet up with Ded Maroz (a.k.a. Father Frost) but he wasn't there, then she seemed to get imprisoned and there was a mischievous character.... well there was singing and dancing and sparkly costumes and the kids sat still for 45 minutes watching it - not a major feat for Alex who is used to longer performances but I was happily surprised about Zoltan. 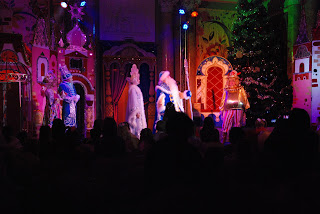 After the show we got let out into a series of rooms with games and things to play with and on. A huge slide that looked like a snake. A little play house like what you might have outside in your yard. A stack of large foam "blocks" like at Gymboree. 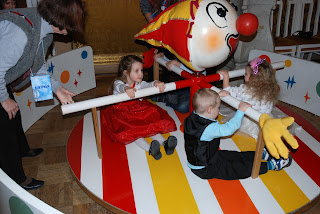 We played for a while but the kids were already tired and hungry so it wasn't more than 30 minutes. Then to collect our presents - big boxes of candy - and home.
Posted by Lynne at 1:12 PM

O - M - G
Zoltan looks so handsome and grown up in his suit and of course, Alex looks amazing in the red dress
Gorgeous pictures of my beautiful grandchildren