[note: this was written soon after the actual trip to the cabin, but I  had to wait until the photos were edited so that Terry would allow them onto the blog. Hence, the timing will seem off. Yes we are now back in Russia and yes the trip to the cabin was more than a month ago]

As usual, we got a whopping few days at the cabin during this 6 week R and R trip. But we got an important milestone accomplished, and I am so in love with my father in law for making it happen.

The steps to the "front door" used to be a mangled, topply mess of forest with a wooden frame around each "step". In the last year he's leveled and cemented them, except for the topmost step. Here's Zoltan standing in what will be the filled-in last step. Here's the kids helping Pop-pop with the cement ... 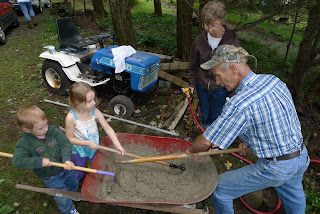 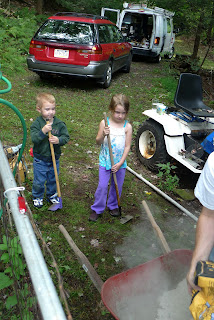 and then, most momentously, leaving their handprints forevermore. 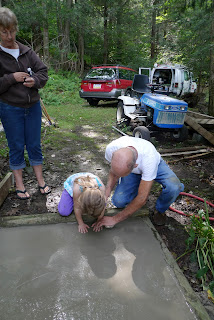 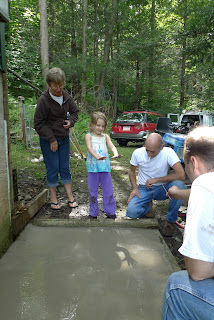 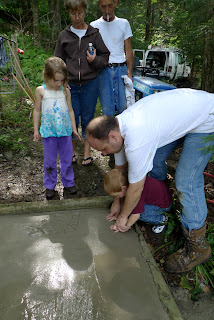 I warned Terry when he wrote "9/6/2012" that with as much time as we spend everywhere else in the world we wouldn't remember if it was June 9 or September 6 but he didn't care. So here's the reminder. 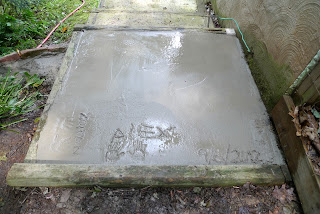 It was also nice to be 4 days without internet or TV, and see how much Alex loves going on "adventures" up the hill and how 2 of the 25 1-year-whip apple trees we bought from the PA Game Commission (or something like that) are still alive and how huge the plum tree is (just needs a mate so it can start producing!)

We also found an orchard, Brace Orchard in Dallas, that sells its apples and peaches and makes fresh apple cider 3 times a week. The peaches were tasty but nothing special, apples a bit better than that, but the cider ... we decided it was worth the hour's round trip to get more although in the end we didn't make the trek. Next year we're definitely getting a gallon and finding a way to fit it in the fridge!
Posted by Lynne at 4:30 PM