We foolishly encouraged Alex, as a tiny infant, to form her deepest attachment to a stuffed animal of discontinued design. Aarrugh! We learned with Zoltan and made sure we had 2 of his lovey.

In 4.5 years poor Blabla has been washed too many times, flattened out, had her tail pulled and ear pulled out. Worse, her knit has been stretched and torn. She's had some stitches a few times. After the last minor surgery we realized she might not make it to an old enough age that Alex wouldn't need her anymore. We needed drastic intervention.

Enter Zoltan and Alex both growing out of their current sizes at once, so we had a lot of extra "scrap cloth". We let her choose the piece she wanted and Terry used his super magical sewing skills to put a patch on. I'm not being sarcastic here. When he puts in a stitch you're not. getting. it. out. Not great for hems that are supposed to be cut out as the kids grow! Extra bonus that we found some cotton from back during winter when our one nanny made a Santa for the kids, including fluffy beard and mustache. So now Blabla has come back from the brink of anorexia to reasonable health. 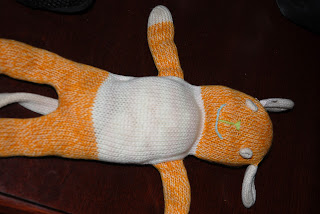 I think she now looks like she's wearing a cape. Super Blabla! 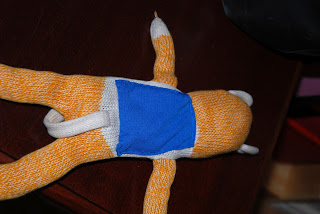