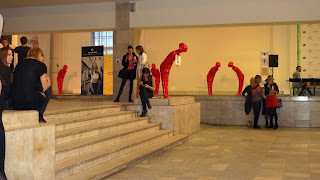 So this post won't do much for dispelling the rumors of our high-falutin' fancy pants diplomatic lives.

It was Aurora Fashion Week in Piter, and the Consulate was able to score some tickets. Some friends and I went. It should go without saying this was my first fashion show, and I had no idea what to expect.

An American, Thom Browne, was the headliner and the main show. At 11:00pm. So Russian! We went a bit early to check out the place and other shows but TB was our main purpose. The first show we went to went like this: The show was to start at 9:00pm. Around 9:00pm we wandered over to the crowd of people massed together like Indians at the train station and started weaving our way towards the front. We got as close as we could then waited, crushed alongside the other 100 or so people like Japanese getting into the subway. When the bouncers finally started letting people, the 4 of us who'd gone together got a bit separated but only for moments and eventually we all squeezed through. We even found seating for 3 of us, which was fine as only 3 of us were in heels.

The show itself ... first 4 men in shorts and T shirts, then 4 women in similar gym attire (with super high heels). Sweatshirts .... nothing interesting. Nothing very pretty. One of my friends couldn't get over how unappealing the models were. In sum, maybe worth it to have the experience but certainly not worth our time. We had thought initially that when we got into the show we'd just stay put so we could keep our seats for the next show, but everyone had to clear the room between shows.

We decided to skip the 10:00pm show and save our energies for Thom so we went to get a drink and while milling about we found some more people we knew, including the guy who got us the tickets who was in the VIP section. He did eventually come slumming and hang out with us for a while, and when it came time to line up for TB he invited one of my friends to go with him. Good thing for her as she's the only one of us who saw anything. We got back into the scrum, which at first seemed smaller and calmer than the previous one but after 30-40 minutes of jostling we decided we didn't care that much and our feet hurt so went to get another drink and sit down.

About 15 minutes after we'd settled down - and been checking the progress of the show on the video monitors 20 feet from where we sat - a crowd began to fill into the area where we sat. I recognized some of the people who'd been standing near us; most of the crowd never got in to see the show. We should have quit earlier but at least we got some comfy seating from bailing as early as we did. At least we could watch the show on the video monitors when our conversation didn't take our attention away.

We decided to skip the after-party, figuring it would involve as much standing, waiting and being crushed as the shows had and after one aborted attempt (turns out some bars actually close for Easter. This place isn't as heathen as some might think!) we settled in for some food and beer at the Telegraph. Good wife that I am, I noted they carry 2 Scotches T likes although we could buy a bottle through PJs for the price of a glass.

I got home at 2:30am, which I never do as wake-up time is wake-up time no matter what bedtime was. The kids miraculously slept til 8:00am. I guess daddy being away affected them more than I had thought - which means he's never allowed to travel without us again!
Posted by Lynne at 3:38 AM