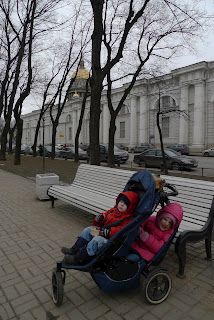 Zoltan's nannies are fabulous, as I've mentioned a few times. Among other things, they take him all over the town, and he's been to museums I don't even know the location of. Lately he's been transiting the city via "rolly-bus", aka trolleybus. Alex has become envious.

With this in mind, I decided to keep Alex home Friday and have an adventure. We went down to Nevskiy and popped onto the first trolleybus we saw (#7). It was pretty crowded and Alex, in the underneath part, couldn't see much but the kids were thrilled anyway. At one point we passed some former palace or mansion and it had Greek style statues adorning it. Zoltan yelled out "Mommy, they're maykin'd (naked)" One lady standing by us started giggling. I think she understood English.

We got out at the last stop as the stroller was too big and the bus too crowded to get out earlier. We ended at ploschad Truda so I had some sense of where we were. I had thought we'd head to the Neva as Zoltan loves water but he started complaining of being cold - I didn't have the fight in me to force him into his snowpants when he refused to put them on in the morning. So instead we headed toward Nevskiy with a short stop for photos with St Isaac's while the kids enjoyed their snacks.

On the way home we got onto a regular bus (avtobus) and were positioned right by the door so this time Alex could see stuff. All in all they were pretty stoked with the day. Of course it began with TV (Charlie and Lola, the first time they watched one) and ended with a play date so there's little to complain about.
Posted by Lynne at 12:39 PM