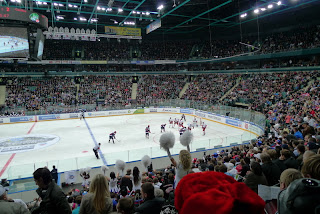 One strange thing about the arena is that you cannot drink in the stands. During intermission everyone piles out to the concourse to get drinks and food. Then quickly drinks and heads back to the stands. It is very odd that you can drink almost everywhere in the city but not in the hockey arena’s stands. Last observations is that during the lineup announcement all the Hurricane players came out and perfectly lined up along the blue in nice orderly fashion. While the Ska players came out some lined on the blue line some skated around behind the blue line. They were very laissez faire about the whole thing. After being here for so long it reminded me a lot of Russian society. It is orderly but only so orderly.
Posted by Terry at 11:52 AM